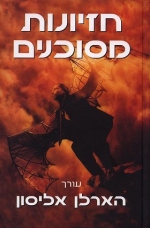 City of the Future under Siege 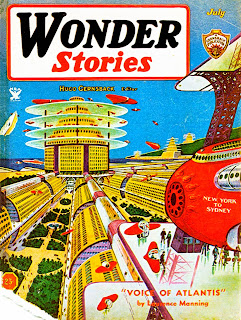 One of the most enduring images of early science fiction, which is also one of its most well-known clichés, is the futuristic city. It is a clean, well ordered metropolis of quiet broad avenues in which slick teardrop shaped cars move in silence and wise peaceful people walk, dressed in white and golden robes. The people themselves, by the way, are usually white and golden. Every SF fan knows these images.

This futuristic city is, to some extent, the quintessential expression of the utopian aspect of early SF. It represents a new and better world. This is a clean, quiet, efficient world. It is a world serving its inhabitants, who themselves embody the finer sides of mankind, having forsaken the brutish, bestial side of Man. The futuristic city aims to represent, to some degree, the next step in human evolution.

In this post I want to discuss the way two SF stories, from two different eras, deal with the futuristic city, and show how each reflects the time it was written in. The earlier is Harlan Ellison's "The Prowler in the City at the Edge of the World", which was published in 1967 as part of the Dangerous Visions anthology and represents the New Wave in SF. The other is William Gibson's "The Gernsback Continuum" (1981) – one of Gibson's first SF stories, which is a Cyberpunk story. The way each story deals with the futuristic city stems from the movement or sub-genre to which it belongs, and from the way these view historic early SF, which first gave rise to this city.

"The Prowler in the City at the Edge of the World" is a story about Jack the Ripper, who was brought by means of time travel to a futuristic city, which Ellison takes care to describe in some detail. The inhabitants of this city, which is technologically very advanced, torture Jack in refined and evil ways. Jack spends parts of the story in this city, and in other parts Ellison sends him back to London in the summer of 1888, the year he committed his atrocities.

By going back and forth between the futuristic city and Victorian London, a clear parallel between these cities is created. If in the inhabitant's behavior Ellison exposes their underlying savagery, by drawing a parallel between the two cities he makes it clear that the futuristic city is a direct descendant of its Victorian predecessor. Thus it is not really a new creature, not a revolution in human social organization, but a mirror image of the Victorian city. It is no wonder, therefore, that its inhabitants can be monsters just like Jack the Ripper.

Gibson deals with the futuristic city in a completely different way. "The Gernsback Continuum" tells the story of a photographer, tasked with documenting the "futuristic" buildings that were built in the US, mostly in California, which were inspired by the SF visions, and are now abandoned and are decaying. These building represent a future that never was, a promise never fulfilled.

Slowly the protagonist starts having hallucinations of this perfect future; the vehicles and structures, as well as the perfect people occupying them, invade his daily life. This "Americana that never was" which he was sent to shoot, "the children of the lost 1980s" as the protagonist calls them, as imagined by the pioneers of SF, appear unbid and without warning in the photographer's dreary 1980s, which are Gibson's dreary 1980s. This is the starting point of the story, and most of it deals with the protagonist's attempt to get rid of the hallucinations that invaded his world. Unlike Jack the Ripper he has no real interaction with these figures – he sees them, but they are not aware of his existence.

This different way of dealing with the futuristic city stems from the different ways The New Wave and Cyberpunk relate to the past of SF.

The New Wave is essentially a movement that rebelled against the SF that came before it, and you can't rebel against something without acknowledging it in some way. New Wave writers demanded to recreate the SF they grew up on, and give it new meaning and a new, deeper, character. This is exactly what Ellison does in his story – he accepts the futuristic city of early SF as is, but reveals new layers of the city and its inhabitants. To a large extent, this is a reworking of old topics in a new style.

Cyberpunk's approach to the past of SF was more radical than that of the New Wave. This movement's writers claimed that the SF's validity stems from its connection to the world in which it is created, and that the writers of the generation before them lost that connection. This gave rise to their demand to reconnect the genre to the "here and now" of their time, the 1980s. This nature, and the time that passed since the early days of SF, enabled the Cyberpunk writers to put aside classic SF altogether.

Unlike Ellison, Gibson did not feel the need to rework the futuristic city. When he deals with it, it appears as a hallucination forcing itself on his reality. For him the futuristic city has lost its substance, and in order to write SF of the here and now one has to get rid of the remnants of illusions it casts on the present.

This, of course, is not the only reason for the different way these two stories deal with the futuristic city. The writers' natures must have a huge impact on their writing, and we must not forget that Ellison's story was written in a world created by Robert Bloch in another story in that anthology so some of its roots are there. And yet I maintain that the nature of these movements and the way they saw the past of SF explain to a certain degree the way they relate to the Futuristic city.
--------
I'd like to thank Joshua Weintein for copy editing this post. Any mistakes in it are all mine.
Posted by אהוד מימון at 21:57 אין תגובות: Links to this post