Home is Where the Characters are

About creating a sense of place in two books 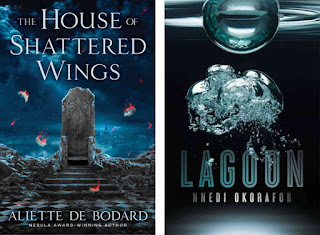 A while ago I read two one after another – Aliette de Bodard's "The House of Shattered Wings" and "Lagoon" by Nnedi Okorafor. It was a fortunate coincidence, because even though these are very different books, seen side by side you can see some interesting similarities between the two books. The one that interested me in particular, was the sense of place in these books, and the relationship of the characters with the cities in which the books take place.

On the face of it, these are very different books. Lagoon in a story about first contact with aliens, set in present day or very near future Lagos in Nigeria. The House of Shattered Wings is a story set in post-apocalyptic Paris, with fallen angels and magic. I'm doing both these wonderful books a disservice by describing them so simplistically, but it's important to mention where the stories take place, because what they have in common is the amazing sense of place that both de Bodard and Okorafor manage to crate in these books.

This sense of place, of Paris and Lagos, comes through in two ways. One is descriptive. Both Okorafor and de Bodard do a wonderful job in conveying to the reader not only sights and sounds of the cities, but also the elusive sense of atmosphere of a city. We all recognize this sense of place when we come across it in a book, even if we can't really describe what it's made of. In the case of these two books we, the readers, can easily relate to the crowded, busy, bustling streets of Lagos, and to the tense atmosphere of Paris trying to cope with its fall from grace, with the aftermath of the war.

The other way the reader can get this sense of place is through the way the characters interact with their surroundings. Even if not explicitly, readers recognize when characters are truly part of their environment, and when the place they reside in is inconsequential. We can sense when the characters truly have a relationship with their surroundings, rather than it just being a place where they happen to live and operate. And this is the case in both Lagoon and The House of Shattered Wings, but the type of relationship the characters in each book have with their respective city is very different. While Okorafor's characters are rooted deeply in the city and the land, and this is what gives them their identity, de Bodard's characters are eternal exiles trying to find their place in Paris.

On more than one occasion, when Adaora and the other protagonists of Lagoon are asked about the source of their special powers, they answer "we are Nigerians, and a Ghanaian". But this simple statement is only the tip of the iceberg. Lagos in the focal point, and origin point, for all the characters in the book. Lagos, with its unique blend of people, religions, cultures, traditions and so on, shaped and created them all. But it is also the rich and fertile soil they need to flourish. The aliens come to Lagos' lagoon because it is the perfect starting point for the revolution (or evolution) they bring to earth; Agu comes to Lagos because it is the best place for him to become the protector of the innocents; Anthony, the Ghanaian rapper, finds audience and muse there. And all their stories, and other stories in the book, are woven together by Udide Okwanka that resides under the city. They can't take place in any other place.

The relationship de Bodard's characters have with Paris is very different – they are all strangers in the city, exiles, and keep trying to make it their home. It is most apparent in Pierre and Madeleine, of course. Pierre who has lost his name, his homeland Anam and his place at the Jade Emperor's court, and keeps looking for something in Paris that will replace them after realizing he can't get back. Madeleine how was born in the city, but keeps going back and forth between the two Houses, never quite finding a place in either. Paris is also the place where The Fallen, the outcasts, create the Houses, and I don't think it's too far reaching to argue that this may be a kind of attempt to recreate something of The City, from which they were exiled. The attempt of characters to find a home is also apparent in the short stories taking place in this universe. Morningstar himself looks back to Heaven in the story "The Face of Heaven", and "Paid Debts" is a story about trying to get back home on a smaller, more local scale. All this takes place in Paris not merely because it is a place of exile, but because for these characters it offers a chance to become a new home that no other city does.

These are very two different types of relationship – belonging and exile. But they are both masterfully written, and both have the effect of creating a wonderful sense of the cities in which the stories take place, by virtue of the way the characters interact with these cities.
Posted by אהוד מימון at 20:55 אין תגובות: Links to this post